One in Eight Drivers Uninsured | The Institutes
Skip to main content

Home > About Us > Media Center > Articles > One Eight Drivers Uninsured

One in Eight Drivers Uninsured

MALVERN, Penn.—Countrywide, about one in eight drivers on the road in 2015 was uninsured, according to a new report from the Insurance Research Council (IRC). After a seven year decline from a high of 14.9 percent in 2003, the countrywide uninsured motorist (UM) rate increased from 12.3 percent in 2010 to 13.0 percent in 2015. Uninsured motorist rates varied substantially among individual states, ranging from 4.5 percent in Maine to 26.7 percent in Florida.

Despite the recent increase in the countrywide UM rate, several states with chronically high rates of uninsured drivers experienced significant declines in UM rates. Oklahoma’s UM rate in 2015 was 10.5 percent—15.4 percentage points lower than the state’s 25.9 percent rate in 2012. New Mexico also experienced a significant decrease in its UM rate—falling from 29.8 percent in 2006 to 20.8 percent in 2015. (Even with the substantial improvement, however, New Mexico still had one of the highest uninsured motorist rates in the country in 2015.) Other states with significant improvement include Alabama (8.0 percentage point decline from 2006–15), Arizona (7.2 percentage point decline), and California (5.7 percentage point decline). Despite the recent improvement in states with chronically high UM rates in the past, the number of jurisdictions with increasing rates from 2010–15 doubled the number with decreasing rates.

The IRC report, Uninsured Motorists, 2017 Edition, examines data collected from 14 insurers representing approximately 60 percent of the private passenger auto insurance market in 2015. For more information on the study’s methodology and findings, contact David Corum, at (484) 831-9046, or by e-mail at IRC@TheInstitutes.org. For more information about how to purchase the report, visit the IRC’s Web site at www.insurance-research.org. 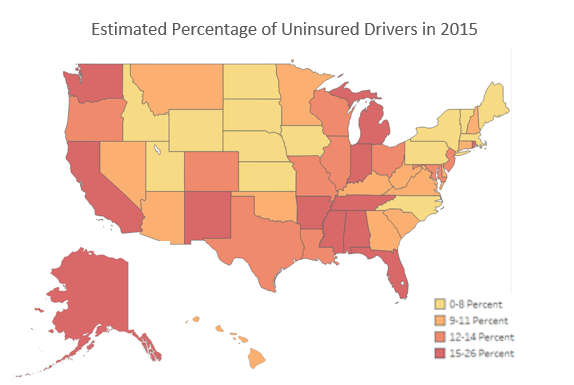 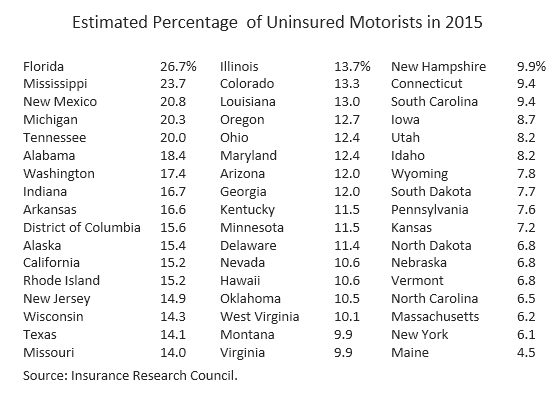