Many Homeowners in Coastal Areas Remain Unfamiliar with Hurricane Deductibles

MALVERN, Pa. - Almost five years after Superstorm Sandy, one third of homeowners in several coastal states are still unaware of hurricane deductibles and how they work, a new Insurance Research Council (IRC) poll has found. The findings come as the National Oceanic and Atmospheric Administration projects two to four major hurricanes this hurricane season, which lasts from June 1 through November 1.

"The findings from this survey suggest that ample room exists for educating homeowners about a key feature of every homeowners insurance policy-deductibles," said Elizabeth Sprinkel, senior vice president of the IRC. "The need is especially acute as the 2017 hurricane season gets underway and insurers hope to minimize post-event misunderstandings with their policyholders regarding deductibles."

Hurricane deductibles were a prominent issue is 2012, with misunderstanding and confusion due to the fact that Sandy did not make landfall as a hurricane. These deductibles, which became more common after insurers suffered heavy losses from Hurricane Andrew in 1992, are often calculated as a percentage of the insured value of a home, another concept the IRC survey found unfamiliar to homeowners. One in three respondents with percentage-based hurricane deductibles did not know or were unsure of the percentage applicable to their deductible, and four in 10 did not understand the basis for calculating the deductible. One in four respondents incorrectly thought the percentage was applied to the total amount of their claim.

The survey also found that the level of understanding of hurricane deductibles varied across the five states studied. Compared with respondents in the other states, New Jersey respondents demonstrated the lowest level of awareness and understanding of several hurricane deductible issues, despite issues, despite the fact that about 346,000 homes in New Jersey were damaged or destroyed by Sandy.

The report, Public Understanding of Hurricane Deductibles, Need for Consumer Education Persists, is based on an online survey conducted by GfK Public Affairs & Corporate Communication on behalf of the IRC. 1,047 homeowners were surveyed - 200 or more in each of the 5 states studied. Only homeowners living in selected counties where the home involved was their primary residence and with insurance coverage purchased exclusively from private insurance companies were included in the survey. For more detailed information on the study's methodology and findings, contact David Corum at 484-831-9046 or by email at IRC@TheInstitutes.org. Visit IRC's website, www.insurance-research.org, for more information about purchasing a copy of the report. 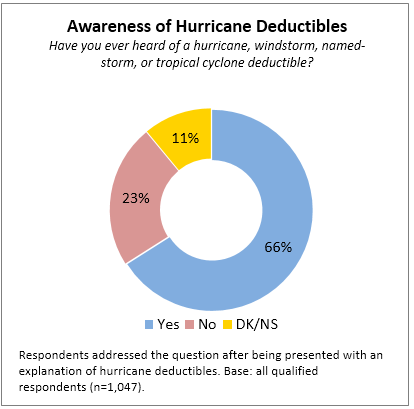